Are you located on the East or West Coast, and need an assignment shot in this area? We are happy to go anywhere in the three-state region to meet your assignment needs, and we know what it means to work on a deadline. From news to sports, we do it all.

The following pictures are just a small sample of my photojournalism work.

A collection of photos from the Allen County and Fort Wayne.

For 13 grueling days, Indiana law officers ride the perimeter of the state, just under 1,000 miles, to remember fallen comrades

FORT WAYNE, Ind. — Lt. Gary Dudley of the Indiana State Police started a bike ride back in 2004, and it became a tradition that continues today.

For 13 grueling days, Indiana law enforcement officers ride the perimeter of the state, just under 1,000 miles. Along the way, they visit families of officers lost in the line of duty. At each stop, they read remembrances of fallen officers: Their names and ranks, when and how they died. Some died within the past year, while others died over a century ago. On the side of the box truck that accompanies the bicyclists, new faces appear each year as officers who have died in the past year are honored by having their photos placed there. Markers are available for people to write a memory on the side of the truck at each stop.

Riders Rich Crawford, of the Indiana State Police; Steve Knight, Indianapolis Police Department; and Capt. Monica Zahasky, Bloomington Police Department, were all there at the beginning before the ride started. In 2002, Dudley told Knight he was riding to Washington, D.C., for the Police Unity Tour. A year later he told him he was riding to Washington, D.C. with Crawford and Zahasky. Knight decided to tag along.

Zahasky said the first time she rode with Dudley to Washington she remembers thinking, as a former high school athlete, it would be easy. But there are some pretty big hills between here and Washington D.C., Dudley pushed Zahasky up many of those.

“He would say the pain you are feeling right now is nothing compared to the pain those survivors feel on a daily basis,” Zahasky said.

The ride was an adventure, a nine-day ride with six of those days in the rain. Coming back, Knight said Dudley told them he would like to organize an Indiana ride, build a foundation that would assist fallen officers’ families and recognize those fallen officers so they would never be forgotten. And so he put together the Indiana ride.

Dudley was an instructor in Plainfield for the Indiana State Police. Because of his position, he had connections with officers all over the state. When it came time to put together the ride, he was able to tap into those connections to help make the ride happen.

“He trained a good portion of the state police,” Knight said.

In the early years, they struggled to find a support truck and places to stay and to eat that would donate food and accommodations so they could keep the money that came in to go to the charity with the Indiana COPS organization.

Two years into the organized Indiana ride, in 2006, the group was cycling south on Indiana 63 two miles south of Interstate 74 near Perrysville around 12:30 p.m. The driver of a freight truck rear-ended the riders’ support van, pushing the van into the riders. The van had a large banner warning of the cyclists and was using flashing amber lights at the time of the collision. Lt. Dudley and Deputy Chief Gary L. Martin of the Lake County Sheriff’s Department died at the scene from their injuries. One of the other cyclists and the drivers of both vehicles were injured.

Every year the riders go past the scene of the accident. Crawford said that is the hardest day of the ride. The closer they get, the more the vivid the memories of what happened grow. Nine years later, Crawford said it is as fresh in his mind as it was then.

After the accident they all paused, wondering if what they were doing was safe if they should continue. But to end the ride seemed like a disservice to Dudley’s memory.

“We kept going to honor his memory, ” Zahasky said.

The accident brought attention to the group, the Cook Foundation gave the Indiana COPS organization a $1 million donation and another company donated a box truck. Where once they would have only had six riders on a few days of the ride they now had many. The response from law enforcement was overwhelming Crawford said. They had more offers to escort the ride than they knew what to do with.

A couple of years ago they broke from the Indiana COPS organization and became their own nonprofit organization. Crawford said it was a natural progression and they continue to have a good relationship with Indiana COPS.

“I don’t think any of us would be here right now if it hadn’t have been for Gary Dudley,” Crawford said.

The red helmets on the riders, on their ride jerseys and on the t-shirts all represent Dudley. Illinois Cops Cycling for Survivors also has the red helmet on their jerseys. The Indiana ride now includes friends of law enforcement and survivors.

Law enforcement officers are given priority if the number of riders for a day is full.

“The back of our jerseys has our mission statement: ‘riding to remember.’ We ride to remember fallen officers and support their families,” Knight said.

On the side of the box truck is the Cops Cycling for Survivors logo: a man pedaling, wearing the red helmet to symbolize Gary Dudley. Written over the logo with a marker is a message from Crawford to Dudley: “Rest in peace Gary Dudley, we’ll take it from here.”

And so they have.

Formula for Life, a student organization at the University of Saint Francis, is working to give the Haitian orphanage Our Lady of Perpetual Help a new home near Cap-Haitien.

Formula for Life is a philanthropic international organization founded 10 years ago by Saint Francis student Cortney Shepard. Shepard was moved by the plight of starving children in the Dominican Republic. For the past 10 years, a team of 10 USF students has coordinated volunteer events to raise money for infant formula, powdered milk, vitamins and requested food. Every year, the group holds a 5K run and walk. Starting in 2014, it has a bike tour and race to raise money. Since 2011, the group has raised $150,000 in money and materials to help build a home for orphans at Our Lady of Perpetual Help. The Rev. Andre Sylvestre runs the orphanage. A graduate of Ball State with a master’s degree in counseling psychology, Sylvestre returned to his homeland after the 2010 earthquake, which killed more than 300,000 and displaced more than a million other people. He found a 4-year-old child begging for food on the street and discovered the child had a 2-year-old sister and another sibling, an infant. The children’s’ parents had died in the quake. From that encounter, Sylvestre was driven to start an orphanage.

Sylvestre was recently in Fort Wayne. He said the orphanage, now in rented space, has 19 girls and 12 boys. Two of the boys sleep on mattresses on the floor because the orphanage has run out of beds.

“I hope in the future some of them will be able to work at the orphanage,” Sylvester said.

The new orphanage in Haiti is nearing the stage when the orphans will move in next June. Formula for Life is figuring out how to get a modular home onto the property for the nuns.

Depending on the year, Amy Obringer, faculty adviser for the group, has a core of 10-15 students who are involved in the student-run organization.

“I had no intention in being so involved. In the beginning I would just sign things off for Cortney,” said Obringer.

But that changed. Ten years later, Obringer is very involved. Until recently, she had approached students who she thought might be interested in being involved. Lately, students have been approaching her. Frequently the students are in the nursing program or pre-med, because these students are the ones who Obringer meets as a biology professor at USF. A larger base of student volunteers gets involved when the group organizes and holds charity events.

Jessica Lynn, a former member of Formula for Life, said she got involved with the group after hearing about it from a friend. In her sophomore year, she transferred to Saint Francis and soon joined the group through its 5K run.

She volunteered for a trip to Haiti, where she met the children of the orphanage and Sylvestre.

“I was able to experience firsthand the poverty that strikes Haitians every day. What the Haitians lack in resources, they make up for in the hope they have a better life,” Lynn said. “I am grateful to have been a part of the team to provide the Haitians at Father Andre’s orphanage with the means for a better life.”

As the project for the new orphanage gets closer to completion, Obringer said, they will not be as involved in building other buildings on the site but will instead look for ways to help maintain what is there. She hopes to start bringing classes down to the location to help with their agricultural endeavors and to study malnutrition problems in the area. In the future she would like to get other faculty and students involved in taking student groups to the location.

She said down the road it would be great to set up a scholarship program for the orphans so they would be able to attend Saint Francis. 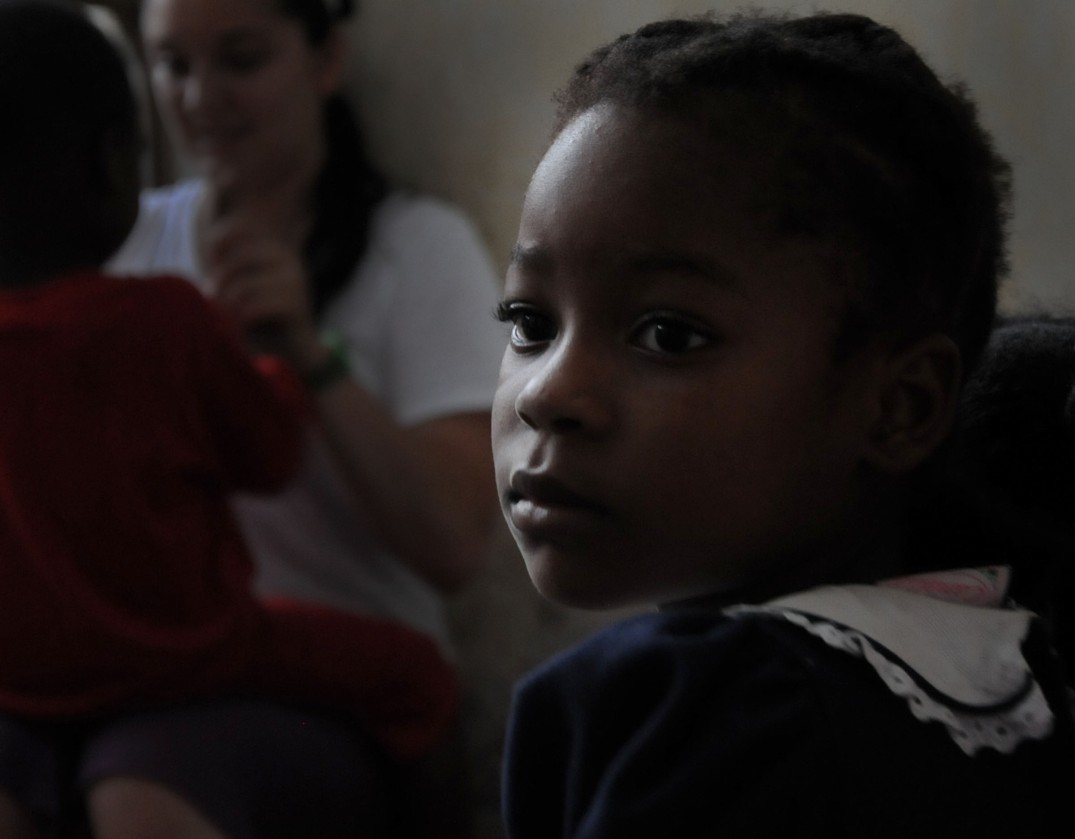 In 2013 I went to Haiti to write a story for Fort Wayne Magazine about Formula for Life. The University of St. Francis student group has been sponsoring the orphanage, Our Lady of Perpetual Help, in Cap-Haitien, for almost ten years. At that time they were in the process of planning the construction of a new orphanage just outside of Cap-Haitien. These photos are a collection of some of places and people we came across on the trip.

I have been a photojournalist since the mid-1980s. First working in Pennsylvania, then  Indiana, to work for The Chronicle-Tribune. I eventually joined the staff at the News-Sentinel, Fort Wayne, Indiana. In 2016 I left the newspaper, by choice, and I am currently working as a contract writer and multi-media journalist. The following slideshow is a very small sample of some of the photos I have shot.